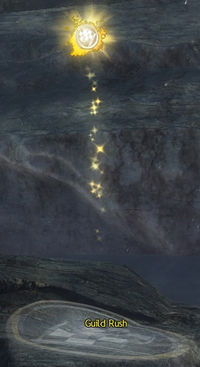 Start position for a Guild Race.

Test your skills with a mad dash over harrowing terrain, traps, and other hidden dangers. Just remember, there’s safety in numbers!

Guild Races are open world guild missions where players are transformed (for example, into a chicken or a bear) and then required to pass through a series of markers before reaching a finish line within a given time limit. Non-transformed players can assist them by clearing or distracting mobs from their path and using boons such as swiftness.

Any player with the 'Mission Control' permission for their Guild Rank can trigger the race from the Missions tab of the guild panel. Once begun, 15 racers must cross the finish line within the time limit or the race is failed. The racers do not need to be members in the guild which activated the race. Multiple guilds can gain credit from the same race by activating their own Guild Race in the Missions tab, interacting with the in-progress banner, and then having at least one member complete the race within the time limit.

During the race, participants are under the

Guild Race (effect) effect, which transforms participants into a specific animal associated with each type of race. The skills in the skill bar are replaced with a new set of three skills. The first skill is always Search, which detects nearby traps for you and other transformed members, but the other two are specific to that particular race. Other players can remain in their normal form and attempt to escort the transformed players, but credit is only given to players that have crossed the finish line while transformed. If a transformed player starts getting too close to the edges of a race, they will gain the

The difficulty determines the time limit, recommended number of players and rewards for both the guild and members.

There are two types of traps present in every race: spike traps and falling rocks. Using the Search skill (#1) will display all traps within range for all nearby racers. These traps are always up, but take a few seconds to reset after being triggered. They only affect transformed racers.

Spike traps are smaller red circles, but are abundant, usually seen in batches of 2-3 or more. They do a medium amount of damage and cause cripple/bleeding when triggered. Hitting one won't cause you to be defeated, but racers should avoid further traps until they regain their health.

Falling rocks are larger circles that can easily kill players, but only appear a few times in the course. When triggered, they take a couple seconds to cause damage, allowing most racers to leave the area. However, the effect lasts several seconds and can easily catch players a little behind the first.

Members of a guild that successfully finish the race receive the following rewards:

Guilds that successfully complete a Race will receive the appropriate level of favor, being 300, 400, or 500. (And a 10% bonus if the guild has not chosen to specialize.)

Bug:
If someone has recently passed the finish line it may not count you and you will have to go though the finish flag again.

Most of these races can be made easier by the use of "escorts": non-transformed guild members who help out the transformed guild members during the race. Escorts can make things easier by using supportive abilities (such as healing skills or swiftness boons), providing guideposts to point out where to go, or distracting and clearing out events/mobs that would otherwise defeat their fellow guild members. Depending on the difficulty level, there may be ample time to allow the escorts and racers to swap places to allow all members to get their individual rewards. In addition, as guild members complete the race, they can become escorts to help all those remaining.

There are generally two ways to use escorts, depending on the specific race:

Guilds do not have to use escorts at all to succeed (although it can significantly increase the difficulty), or they can use both at the same time provided they have the numbers. Some races are limited in what escorts can do by design, as many mobs may only be hostile to transformed players and not to the escorts (preventing the escorts from defending the racers against them).