Rush the icy waters of Talabaroop Waves in Frostgorge Sound.

Quaggan Paddle is a Guild Race where members transform into a quaggan to travel through an underwater course from the Blue Ice Shining sanctuary, through Dimotiki Waters, to the Deep and Troubled Waters sanctuary. Racers will pass through underwater rings at each flag while dealing with mines, steam vents, and a host of undersea enemies such as: Arctic Jellyfish, Reef Skelk, Undersea Ice Wurms, Poisonous Urchin, and Ice Sharks. Unlike other races, players do not have a Search skill. Instead of spike and rock traps, racers must contend with underwater mines and steam vents. The steam vents will knock you back with some damage, but the mines will kill you in one hit if you come too close.

From Twoloop Waypoint go South-west to start (yellow line on Event map) that is underwater at the bottom. The Guild Race

Icon does not appear on the map unless it has been activated.

When not assigned to you and not started
A guild officer needs to activate this race for you before you can participate.

When activating race
Would you like to start this guild race? Warning: the timer will run out in 30 minutes.

After the race has started
Your guild has opened this race course to you. Would you like to participate?

You'll be transformed into a quaggan and will have to dodge mines and enemies while racing the course.

How will I know where to go?

On your map you'll see blue flags identifying course checkpoints. Race through the checkpoints in order to reach the finish line.

When you're defeated during the race
You've been defeated. Would you like to return to the starting line?

Racers are transformed into a quaggan with 2000 health for this race. 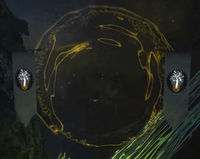 The racers must pass through several of these rings.

Begin swimming directly ahead and down towards the first flag. Keep heading down along the bottom of the ravine as the next flag is even deeper. Don't get too close to the jellyfish as they will begin to chase you. The course curves to the left after the flag and you'll come across the first two vents. Stay out of the steam as they will knock you back and set you on fire. You'll also start seeing the first ice wurms. Avoid their projectiles and keep swimming, passing through the flag.

Mines will start appearing. These will kill you in one hit (even if another player triggers them). For the most part, you should be able to stay under them for now. Keep heading west along the path, and follow the cave as it turns north near the next flag. You'll start seeing more jellyfish and skelk. Keep heading north under the glacier, staying as far as possible from the mines.

Passing through the rock formation after the flag, you'll enter a long stretch of the course with three flags along the way where mines are everywhere along with ice wurms. It's actually safer to stay in the middle (horizontally and vertically) and to the right as there are mines close to the bottom and there's a relatively clear path in the direct center-right of the course. Watch out for the wurms as dodging the projectiles could throw you into a mine. Be ready to use your Dart skill to speed past without trouble. There will be one flag about halfway down the corridor, and then another right in front of a rock formation, with the last nestled between some plants. Watch out for mines buried in the plants.

After the third flag, the course will begin to rise towards the surface. At the top of the rise is your next flag. Beyond this there isn't much danger other than some sea urchins. Occasionally there will be an event to kill a veteran largos assassin that escorts should keep an eye on. There are two more flags awaiting you before you're done.