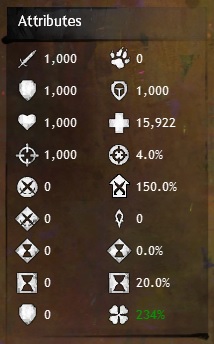 The attribute window as shown in the hero panel for a ranger.

Attributes are characteristics which improve a character's effectiveness in combat. There are 15 core attributes, and one additional attribute that is profession-specific.

Attributes are increased primarily by the equipment worn by the character and though the trait system, by spending trait points in the various trait lines. In PvE, attributes can also be increased through the use of consumables.

In addition to attributes, all characters have certain "hidden" statistics and values like movement speed or endurance regeneration rate. All professions have the same base attributes, except for Armor, which is determined by armor class, and Health which is profession-specific for balance reasons.

All professions have four common primary attributes, two offensive and two defensive. Primary attributes have a base value that grows with character level, starting at 24 for a level 1 character and capping at 916 at level 80.

Power
Increases all damage inflicted by the character.

Toughness
Decreases the amount of incoming damage suffered by the character.

In contrast to primary attributes, the five secondary attributes have a base value of 0 and do not automatically increase as a character gains levels. They can only be increased by spending points in the relevant trait line or with equipment bonuses.

Boon Duration
Improves the duration of all boons applied by the character.

Condition Duration
Improves the duration of all conditions inflicted by the character.

Healing Power
Improves all outgoing heals that your character does, including self heals.

The four derived attributes are calculated from the primary attributes and statistics from gear and profession.

Critical Chance
The chance for an attack to result in a critical hit. At level 80, it has a base value of 4% and is increased by Precision (21 Precision = 1% Critical Chance).

Critical Damage
The damage multiplier for a critical hit. It has a base value of 150% and is increased by Ferocity (15 Ferocity = 1% Critical Damage).

Health
The character's maximum health. Base value is determined by profession and increases with level; improved by Vitality (1 Vitality = 10 Health).

There are two additional attributes with unique mechanics.

Agony Resistance
Improves resistance against Agony, encountered in the Fractals of the Mists; can only be increased through infusions and infused equipment.

Magic Find
Improves the quality of loot; can be increased through luck, the Magic Find account bonus, and a Magical Infusion.

Virtue Recharge Rate
Reduces the recharge on all virtues.

Steal Recharge Rate
Reduces the recharge of the steal ability.