The Matrix Cube Key is used to gain access to a platform at the center of the Thaumanova Reactor where the event Defeat the misplaced steam ogre occurs.

The key spawns in random locations on the ground and will always be hidden, either obscured or covered. It will be topped with small green flames, although it can appear as a small lumpy rock or as a small obelisk. It looks similar to the chaos shards in the area, but smaller. The key will change locations or be unavailable at times. For instance, you may have to search the same set of bushes in the earth area repeatedly until you find the key. The key has no name but you will get an interact prompt when close to it. 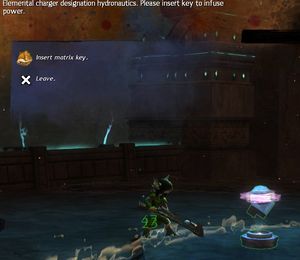 After obtaining a Matrix Cube Key, the player must find the four Elemental Charger devices for each of Ice, Fire, Water and Earth.

Once fully infused, the Matrix Cube Key can be used at the console in the center-most portion (the room with the blue haze) of the Thaumanova Reactor. Jump down into the no longer blocked hole in the ground to fight the Steam Ogre.