This article is about the location in Seitung Province. For the Grothmar Valley location, see Training Grounds. 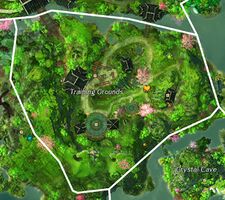 The Training Grounds is an area south of Shing Jea Monastery in Seitung Province. It is here that all the students who come to the monastery are trained to learn about the professions. Previously they had the Shing Jea Arena, today known as the Isle of Reflection, since by tradition fighting was not allowed on the Shing Jea Island, however in years after the fall of the Ministry of Purity the island fell into disuse, which is why the Shing Jea Monastery and the Imperial regime allowed large-scale arena combat at the monastery's training grounds.

Instructor: Yes, Bin?
Student Bin: Master, do you have time to talk about the finer points of muscle activation in the fifth form?
Instructor: Your execution of the fifth form is fine, Bin. Excellent, even.
Student Bin: I don't know, Master. I think I might not be activating my trapezius, and that's why I'm not getting full extension!
Instructor: Well, then, try doing it that way next time. See what happens.
Student Bin: So that's it? I knew it! Thank you, Master. Most people here, they don't know a rhomboid from a deltoid. Hah!

Student Bin: Master, I was also wandering: Do you have any notes for me on the sixth form? I think I might be piking my hips a bit.
Instructor: I promise, the most important thing to remember in mastering the forms is—
Student Bin: "Mind-body connection," yeah, yeah. But that's exactly what I'm doing right now, isn't it?
Student Bin: Using my mind to figure out what's going wrong with my body!
Instructor: Right, Bin, right.