Walloping world bosses might make Tyria safer, but there are plenty of smaller threats lurking around the countryside. They may not be as tough, but they’re plenty mean—and we’re counting on you to remind them who’s boss. 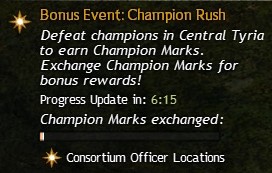 Throughout the event, a progress bar will track the progress of the Community Goals. The tracker updates in 15-minute intervals, increasing as more of the Champion Marks are handed in. However, due to a bug preventing the goal tracker from working properly, ArenaNet has artificially completed the Community Goal. The full set of rewards will be awarded after the event ends to all players who participated.[1]

Mail received upon login during the event duration