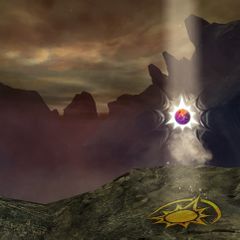 Magmatic Waypoint — , head east across two basalt bridges to the first Shadow Imp and some lava-falls. Behind this imp you can jump up the little slope to the right of the lava. Follow the east bank of the lava-flow up the mountain to the Boiling-Hot Magma. Keep heading north up the slope, and when you can go up no further, jump slightly east onto the next slope.

If you have a Springer, the next portion can be skipped by jumping up onto and over the rim of the volcano, right down to the Mastery Point, on your left.

Continue following the eastern edge of the volcano in an anti-clockwise direction. You will reach a sudden change in gradient where you'll briefly drop down into a trench - climb out of it and emerge on the other side. Now begin walking to the northwest, you will quickly come across a steep incline where you will begin to slip down; look for a small northwards v-shaped gulley where you can walk up the middle and follow it to the top.

A significantly simpler, but longer path starts at the

Maelstrom's Bile Vista and just follows the rim clockwise until you're above the point and can jump down. Neither a mount nor gliding is mandatory.

When you have Skyscale unlocked, you can start from

Maelstrom's Waypoint — and use the rift skill near the lava pool to go all the way up through the volcano.

Before communing and accepting the mastery point
By reaching this point in Tyria, you've demonstrated your mastery in navigating the world.

After communing
This Insight of Mastery has no more to offer you.

(Alternatively, if Aurora II: Empowering is active, you have a Xunlai Electrum Ingot in your inventory, and you have not yet received Volcanic Electrum)

You have reached a locus of power.

Infuse a Xunlai electrum ingot with the power of this location.