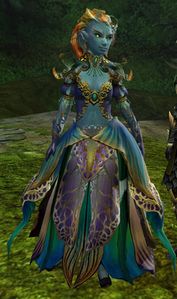 Ysvelta is a sylvari who is encountered by sylvari players as part of the Shield of the Moon personal storyline. She is the beloved of Tiachren, and gave him the Shield of the Moon as a wedding gift. This gift was unfortunately captured by the Nightmare Court, with the Court also poisoning Tiachren and leaving him for dead in the process. Caithe devises a rescue plan for Ysvelta that involves tricking the Nightmare Court into letting the player and Tiachren safely enter into the Nightmare Court's camp. However they arrive a little too late as Ysvelta has been twisted into a Nightmare Courtier and tries to make Tiachren join her, revealing that she is going to lead an attack on the Village of Astorea. The player then must decide to either save the village or Ysvelta, resulting in either killing Ysevelta if the player chooses to save her, or both her and Tiachren if choosing to save the village as choosing the latter will allow Ysvelta to corrupt Tiachren into joing the Nightmare Court.

During Beneath a Cold Moon:

During The Heart of Nightmare: