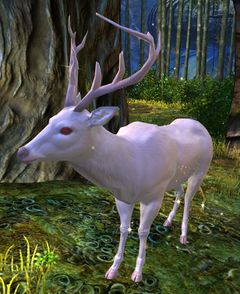 The white stag is a creature of the Dream, symbolizing hope. It is a manifestation of the faith and joy of our race.

— Caithe in Called to Service

The white stag is a creature of enchantment, an immortal beast with great power. It is said that the stag will trade a magical boon for his freedom, if caught.[1] The stag is able to communicate with the Pale Tree.[2]

The white stag is a creature of pure magic from the Dream,[3] symbolizing hope. He is a manifestation of the faith and joy of the sylvari race. Like the Pale Tree, he exists both in reality and in the Dream, and because of this he would provide an excellent gateway for perverting the Dream to Nightmare.[4] To this end, the Nightmare Court seek to twist the white stag into a creature of despair and hatred, a powerful weapon against the Dream.[5]

A creature of pure magic,[3] the white stag could communicate with the Pale Tree while existing both in reality and the Dream.[4] He became known as a creature of legend which few had ever seen. The stag was said to trade a magical boon for his freedom, if caught.[1]

In 1325 AE, the stag was sighted in Caledon Forest. The Nightmare Court wished to capture him in order to corrupt him and, via his magical connection, increase the Nightmare's influence over the Dream. A Courtier named Gavin masqueraded as a Dreamer and sought out the stag but was ambushed and nearly killed by the Risen. However, he was saved by the Valiant who was also after the White Stag due to having seen a vision of the stag as part of their Wyld Hunt in the Dream.

Realizing he could use the Valiant's strength to make his mission easier, Gavin lied that he wanted to capture and tame the White Stag to inspire the Dream and suggested that the two of them should hunt the stag together. The Valiant agreed and took Gavin to Caer Verdant to recover from his wounds, unaware of his true allegiance.

The Valiant and Caithe successfully located the stag after interrogating a few Courtiers, however. Deciding to either trick a high-ranking Courtier named Sariel to leave the camp with most of her vanguard, or challenging her directly as a distraction so Caithe could sneak in undetected, the Valiant contributed to the White Stag's release. The pair fled the Courtiers and took the stag to the Grove.

Sariel, angered at being tricked, took several Courtiers with her and launched an attack to both recapture the White Stag and have her revenge on the pair for humiliating her. When Sariel used underhanded methods during battle, however, Gavin appeared on the scene to stop the assault, reprimanded Sariel for lacking honor and used both his authority and threats to force the younger Courtier to leave.

Intending to resolve the dispute himself and prove that the Nightmare Court still had honor, Gavin apologized for Sariel's behavior and challenged the Valiant to a one-on-one duel: for the winner, the White Stag, and for the defeated, death. The Valiant accepted Gavin's terms and ultimately prevailed in the duel.