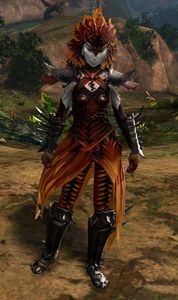 My vengeance will make an inferno feel pale and weak!

The Knight of Embers is a high ranking member of the Nightmare Court who attempts to fulfill her Dark Hunt, to locate the "Harbinger". After tracking sylvari Malyck down, the Knight of Embers discovers Malyck comes from another tree, identifying him as the Harbinger. The Knight of Embers intended to take this information to Grand Duchess Faolain, however, she is ultimately encountered, and defeated, by the player character.