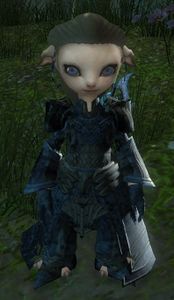 History is like a pair of dice—many-sided and loaded with chance. Every story has multiple angles. Most of us just accept what we're taught, but that can be dangerous.

Scholar Glenna is a Durmand Priory scholar, who serves as a vendor for Magnetite Shards in the Forsaken Thicket and Bastion of the Penitent raids, and Gaeting Crystals for the Hall of Chains, Mythwright Gambit and The Key of Ahdashim raids. The associated raid encounter must be completed before you can buy its items from her. She also offers to buy any raid-themed miniature for 40 Magnetite Shards or 40 Gaeting Crystals, depending on the raid it drops in.

Interested in historical and magical findings, Glenna joined the ranks of the Durmand Priory. Having heard gossip among her fellow scholars of strange magic phenomena in northern parts of the Heart of Maguuma which had begun occurring after the Elder Dragon Mordremoth's demise in 1328 AE, she set out to investigate the jungle.[1]

After entering Spirit Vale, Glenna happened upon a Pact camp full of demoralized and injured soldiers who were recovering from a bandit raid which had resulted in several kidnappings. She did what she could to comfort them, being unable to do much else because the dangers in the jungle were too great for any of them to overcome. In the meantime she began writing a field journal. She also investigated strange ley rifts and mastered traversing through them safely.

When a group of mercenaries answered the Pact's call for help, Glenna acted as a merchant to these raiders, selling them various useful items in exchange for magnetite shards. During these interactions she also heard the mercenaries' tales of what they had encountered in the jungle, which piqued her interest.

Once the raiders had cleared the obstacles in Spirit Vale, Glenna journeyed westward to Salvation Pass where she set up shop to offer supplies to other adventurers seeking to uncover the secrets of the pass, including what the bandits who had been kidnapping people were up to. She followed the trail of brave adventurers who had fought a safe passage through the jungle, and discovered the corpse of Slothasor which she theorized had been mutated from the magical fallout of Mordremoth's death.

Pressing onward, Glenna passed through an abandoned bandit fort which the adventurers had cleared as well as a mass of bodies thrown off the cliff. What caught her eye was a deactivated asura gate leading somewhere in Brisban Wildlands, raising more questions than answers in her mind. She met with the recently freed Pact squad leader, Bennett, who revealed to her the ordeals he had been through in the hands of the bandits who the adventurers had saved him from. The bandits had turned out to be working for the White Mantle cult in preparation for something big involving macabre sacrifices with the Maguuma Bloodstone. Glenna began theorizing about the White Mantle's goals and what part the Bloodstone played in it and decided to investigate further, traveling to the White Mantle's base of power in the region, the Stronghold of the Faithful.

During her investigations in the Forsaken Thicket, Glenna encountered an anomaly and threw a rock at it to test what would happen. The rock passed through the anomaly unaffected, prompting Glenna to conduct more experiments which revealed that the anomaly was like a window to other places, showing glimpses of figures through the mist.[1] 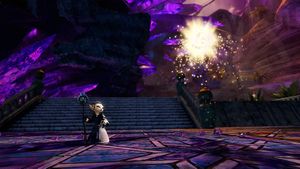 Glenna inside The Key of Ahdashim.

A visitor! I see you've unlocked the mysteries of the ley rifts. Not many have. Why not browse my inventory while you're here?

Show me what you've got.

I have what you need! Peruse my catalog at your leisure, but don't touch unless you've got the coin to purchase. I'd hate to have to take it out of your hide.

How did you get here?

(If you don't have Rift Forger mastery)

I don't have time for people who are clueless about ley rifts. Do your homework and then come talk to me.