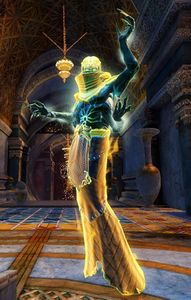 Consider me Ahdashim's steward. I was made by the djinn as the first foundation stone was laid.

The Key of Ahdashim is the guardian of the Hidden City of Ahdashim. Dedicated to her duty, she wishes to keep the city safe from harm and punish anyone daring to abuse the magic within.

The Key of Ahdashim was given life as an elemental construct made by the djinn when the first foundation stone of the Hidden City of Ahdashim was laid in the Domain of Vabbi. She was tasked with periodically selecting four djinn with potential to take the positions of cardinals and anchor the city's flow of elemental magic to lesser djinn of the four elements like the original four cardinals had done.[1] At one point, the Key considered Qadim and Zommoros to be candidates for cardinals of Fire and Water but ultimately chose others she deemed more suitable for the role as Qadim's quick temper and Zommoros's hasty decisions and gambling addiction were seen as flaws. Qadim did not take kindly to being passed over, and resented the Key's decision ever since.

As centuries passed, humanity arrived in Vabbi, and the merchant princes bound many djinn in the region to their service via unknown means while turning the Hidden City of Ahdashim into a sanctuary they could flee to in the face of danger. The Key continued acting as the steward of the city even under its new rulership, acting as a gatekeeper who only let travelers she deemed worthy to get past her into the city's grounds. During the time of Nightfall in 1075 AE, the Key encountered a party led by the Hero of Nightfall who had visited the hiding princes to stop the advance of Abaddon's follower Varesh Ossa. During this time Ahdashim also saw the mercenary Goren and his saltspray dragon ward Shiny settle into the city.

Some time after Palawa Joko's return and subsequent conquest of Vabbi and the rest of Elona in 1175 AE, the Hidden City of Ahdashim was abandoned. The djinn, once bound to the now conquered princes, were seemingly freed from serving their mortal masters. Learning new information about the ley line coursing through the Well of Ahdashim and the inherent dangers it possessed if its power were to ever fall into the wrong hands, the Key and the High Council had a meeting and decided to erect a protective barrier around the city while restructuring and renovating the city to fit their vision.[2][3][4]

Section-stub. This key section of the article is incomplete. You can help the Guild Wars 2 Wiki by expanding it.
Reason: Missing summary.

Section-stub. This key section of the article is incomplete. You can help the Guild Wars 2 Wiki by expanding it.
Reason: Missing dialogue.

Entering the City of Ahdashim
What is it?

How did Qadim manage to tear you into fragments?

Key of Ahdashim: The Mystic Forge changed Qadim's nature. And he grows stronger while you delay.

Before defeating the cardinals
What more do you need to know?

What makes the cardinals so important?

Where are the rest of Ahdashim's djinn?

After defeating Qadim
Thank you all for your help. Zommoros was right to put faith in you.

You're welcome. It's sort of what we do.

Scholar Glenna: Speaking of Zommoros, any chance you'll lift his exile now?
Key of Ahdashim: I'm sure he'll find some way to make his presence felt in Ahdashim, regardless...

How exactly did you stabilize Ahdashim's ley line power?

Key of Ahdashim: I connected every living djinn as an anchor point to the city. An equal distribution regardless of power potential.
Scholar Glenna: I still don't quite understand how djinn far and wide can stabilize the ley line here in Ahdashim.
Key of Ahdashim: It's djinn nature to guard our secrets. If I revealed everything to you, where would that leave us, hmm?
Scholar Glenna: I can honestly say I would be less frustrated.

The cardinals are dead, and you just upended djinn society. What's next?

Key of Ahdashim: There was a time when the way of cardinals fostered harmony and balanced unity...
Key of Ahdashim: But it's clear our old way also bred discord, greed for power. I suppose amendment is good once every few millennia.
Scholar Glenna: Yeah, you djinn seem to be overdue for some top-down restructuring. Maybe some form of timocracy, like Istan—
Key of Ahdashim: Evolution doesn't imply erasure, little scholar. Whatever path the djinn carve will be our own.