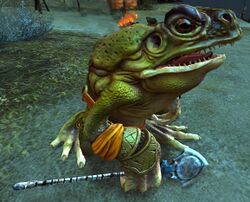 The Heket are the hylek tribe native to Elona. They can be found at Apizmic Grounds, their last remaining known refuge, located in the Domain of Kourna.

Heket tribes used to be extremely aggressive and hunt any humans venturing into their territories, but years of Palawa Joko's reign have taken a toll on their communities, and their numbers have dwindled so much that they are now critically endangered. Distrustful by nature, their current situation has led them to resort to seeking help from anyone who proves themselves to them.