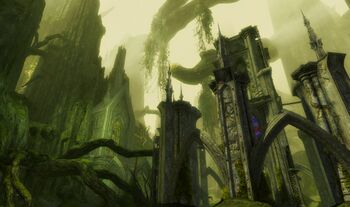 Echovald Forest in End of Dragons.

The largest forest of Cantha, the Echovald Forest was home of the Kurzicks before they were conquered by Emperor Usoku. The Kurzicks were an oligarchic theocracy led by their Council of Nobles. When the Jade Wind struck, the trees and wildlife turned to stone, petrifying it. The Kurzicks crafted their homes and citadels from the gargantuan stone trees.

In the six years following the second and final defeat of Shiro Tagachi, life had begun to spring up in Echovald Forest as many areas saw new growth take hold.[1] This growth presumably continues to this day, with most if not all of the damage done by the Jade Wind having been reversed.

Sometime in the late pre-imperial era, after the appearance of humanity in Cantha, the Kurzicks settled Echovald Forest from lands believed to be beyond Cantha. In the year 51 CC (459 BE), during the reign of Emperor Yian Zho, the forest was invaded by both Luxons, rivals of the Kurzicks, and the emperor's forces. Though the invaders failed to defeat the Kurzicks, they successfully contained them within the forest and the Kurzicks soon became a vassal state.[2]

During the Jade Wind, the forest and its inhabitants were petrified, trees transforming to lifeless columns of stone and birds crashing to the ground, petrified mid-flight. Deer turned to stone mid-leap, landing on the ground as mere lifeless statues. The Kurzicks largely escaped the petrification of the forest, and so began to carve out homes from remnants of what were once trees.[2][3]

During the forest's transformation into jade, the forest spirit Urgoz was corrupted by the Jade Wind, driving him and his wardens to madness. Urgoz, suffering from Shiro's influence, became demonic and twisted, corrupting the forest's wildlife and refugee dredge and using them as pawns in his war against the Kurzicks, taking control of an amber mine to stage his attacks from, which would later be dubbed "Urgoz's Warren". Despite Urgoz's corruption, some Kurzicks carried out hope that if they slew enough wardens, Urgoz would breathe life into the forest once more.[4][5]

The World of Tyria
Retrieved from "https://wiki.guildwars2.com/index.php?title=Echovald_Forest&oldid=2333500"
Categories: