This article is about the Canthan race. For the sylvari organization, see Wardens. 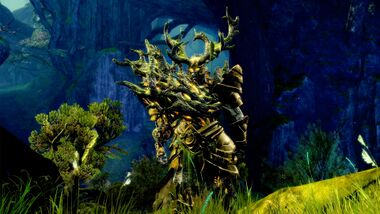 Wardens are ancient plant-like protectors of the Echovald Forest that serve Urgoz.

Warden horns are quite versatile, and have historically been used in numerous ways by the Kurzicks. The horns of adolescent wardens, due to their energy and vigor, were commonly used to enchant staves, whereas the horns of adult wardens were used to reinforce armor and shields. The horns of elder wardens are extremely difficult to shape due to their toughness, and so were used as brushes and instruments by more artistic individuals.[1] The horns of Wardens of Forests are able to be shaped into extremely sharp arrows.[2]

Wardens are forest spirits who were originally Kurzicks that underwent a ritual to merge with the forest spirit Urgoz, transforming them into the immortal plant-like guardians of the Echovald.[4] As the forest's guardians, the warden clans were commanded by Urgoz. With the Jade Wind, the wardens were for some reason unharmed but driven to madness at their failure to preserve the forest and began attempting to slaughter humans in retaliation. The warden clans claim the right of vengeance for the damage dealt to both the Jade Sea and the Echovald and work in mysterious ways to attempt to revert the destruction Shiro caused.[3]

Sometime after the Jade Wind, the wardens alongside Urgoz attacked and took control of a Kurzick amber mine which the Kurzicks had previously used for most of their amber mining, causing their economy to almost collapse entirely.

In 1582 CC (1072 AE), a group of wardens attacked Kurzick settlements in Amatz Basin, where they were opposed by human heroes allied with the Kurzicks. The forest guardians attempted to hunt down and attack refugees fleeing their destroyed homes, but were slain by the heroes. Many Kurzicks were saved, but the wardens continued to infest the region.

Soon after, a group of wardens arrived in the mines of Altrumm Ruins, where they attempted to steal amber from the Kurzick miners alongside dredge. However, they were repelled by the same human heroes as had fought back against them in Amatz Basin, and eventually driven off alongside the dredge and stone constructs. The remaining chunks of amber were harvested by the Kurzick miners.