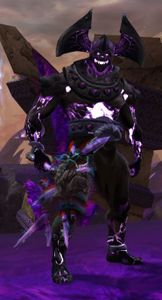 Elite Captain Zor is one of the Branded Awakened leading the Branded at Argon Garrison. Before being Branded by Kralkatorrik, he was the younger brother of Amira, who describes him as eager, quick, and uncomplaining. He had a favorite saying: "Friends, like enemies, wear all kinds of faces."

Section-stub. This key section of the article is incomplete. You can help the Guild Wars 2 Wiki by expanding it.
Reason: Missing stolen skills.