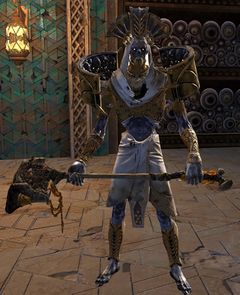 Should've listened to me earlier. Now where's that dragon of yours?

Hierarch Chikere is an Awakened member of the Mordant Crescent who accompanies Archon Iberu's entourage to the summit held at the Fortress of Jahai.

After Palawa Joko's demise in 1331 AE, Hierarch Chikere and other selected members from the Mordant Crescent accompanied Archon Iberu to the summit held at the Fortress of Jahai where they entered negotiations with Spearmarshal Zaeim and other Elonian factions for the future of Elona. After the dragon Aurene crashed the summit and startled many Awakened who had learned that she had been responsible for killing Joko, Iberu decided to betray the delegates and discreetly sent word for Mordant Crescent reinforcements to stage a coup while he and Chikere ostensibly continued the peace talks with Zaeim, the Pact Commander and other participants. Iberu was killed by the recently arrived Awakened Koss Dejarin shortly after the attempted coup began, however, and Koss intimidated Chikere to stop fighting and agree to the terms of Zaeim's treaty.

When the Death-Branded Shatterer interrupted the talks, Chikere joined the others as they attempted to flee the invaded fortress. While fleeing from the Branded, the Hierarch suggested that they use some of the Free Awakened as a distraction to buy the group time to escape, much to Ambassador Sianna's anger. Upon finishing his sentence, however, Chikere was unceremoniously crushed down by the Shatterer's claw and killed on the spot. He was raised as Death-Branded shortly after and appeared deeper in the Jahai Keep where he attempted to stop the surviving group members from escaping. After a short but brutal clash, the Death-Branded Chikere was killed for good while the Commander led the survivors out of the fallen fortress.

Section-stub. This key section of the article is incomplete. You can help the Guild Wars 2 Wiki by expanding it.
Reason: Missing info for other skill

Section-stub. This key section of the article is incomplete. You can help the Guild Wars 2 Wiki by expanding it.
Reason: Missing info.
Retrieved from "https://wiki.guildwars2.com/index.php?title=Hierarch_Chikere&oldid=2367326"
Categories: