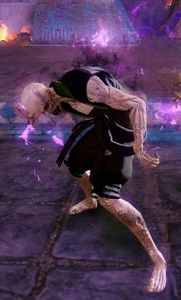 Brand Thralls are humans that have died and have been resurrected by Death-Branded Lieutenant using Death magic in the Free City of Amnoon. They appear and act much like Risen Thralls, but have a purple shimmer radiating from their bodies.

Section-stub. This key section of the article is incomplete. You can help the Guild Wars 2 Wiki by expanding it.
Reason: Missing skills
Retrieved from "https://wiki.guildwars2.com/index.php?title=Brand_Thrall&oldid=2034278"
Categories: