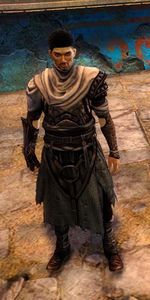 I have a deputy assigned to the local smugglers, the Hamaseen. Name of Qais. Not so sure he's mine anymore, but you might seek him out. If you don't mind walking on that side of the line, of course.

— Captain Rahim in Blazing a Trail

Deputy Qais is a human found near the Grand Sahil Casino in the Free City of Amnoon. He works as a covert operative for the Cavaliers, infiltrating the Hamaseen criminal organization for Captain Rahim. However, Rahim has concerns that Qais may have been compromised and is now working for the Hamaseen instead.[1]

Living in the Free City of Amnoon, Qais joined the ranks of the Cavaliers and eventually became a deputy. He married and had a son and a daughter, and intended to do what he could to provide for them. Captain Rahim sent him on an assignment to infiltrate the Hamaseen criminal organization to dig up dirt on the shady businessman Zalambur. However, Rahim soon realized that Qais may have been compromised and become more deeply embedded in the Hamaseen network than he had originally intended.

In 1330 AE, the Pact Commander arrived in Amnoon in search of the rogue god Balthazar whose invasion was causing damage to the Crystal Desert and its inhabitants. Using the intel provided by Rahim, the Commander sought out Qais and demanded information from the Hamaseen. Although Qais was dismissive at first, he changed his tone when the Commander revealed the plan to hunt down Balthazar and would not let anyone, including Qais, stand in their way. Qais directed the Commander to Zalambur, revealing the businessman being knowledgeable of everything the Hamaseen knew about the desert.

After Balthazar's demise in the Battle of Kodash Bazaar, Qais was among the people attending the party held in the Commander's honor if the Commander had advised the city council to keep Amnoon independent. He congratulated the Commander in his own way, admitting that the relations between Zalambur and Chief Councilor Imann had improved since the Commander's visit. He also revealed that he might not have been as corrupt as the Commander and Rahim had initially thought as he suggested he would be keeping an eye on Zalambur.

However, the party ended abruptly when a Brandstorm created by the Elder Dragon Kralkatorrik hit the city, causing alarm among the citizens.

Memorial to Deputy Qais on streets of Amnoon.

While the first Brandstorm was over quickly, another, deadlier storm hit Amnoon not long after and brought several Branded with it. Qais was corrupted into a Branded in the ensuing chaos along with several other citizens. The Pact Commander, Canach and Rytlock Brimstone engaged Qais in combat and killed the Branded deputy.

Once the storm had cleared, the Commander informed Rahim of Qais's fate and in turn learned about Qais's motives to provide for his family. This information made the Commander realize that there had been more to Qais as a person than met the eye. Despite his misgivings about Qais's ties to the Hamaseen, Rahim nevertheless hoped that Grenth would guide the deputy's spirit to a better place.

As the citizens began repairing the damage the Branded attack had caused to Amnoon, flowers were placed on the street corner near the casino, where Qais had often patrolled, in memory of the fallen deputy.

Section-stub. This key section of the article is incomplete. You can help the Guild Wars 2 Wiki by expanding it.
Reason: Missing stolen skills, remove this part if none

Greetings
I'm doing the best I can on this beat, no matter what you might have heard.
Watch your back, outlander.

As Death-Branded Deputy Qais
Next.