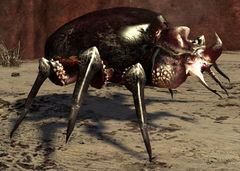 Giant Beetles are a type of insect found in the Maguuma regions. They have an impenetrable shell that leaves them vulnerable only to attacks from the front. In the Heart of Maguuma region, they are part of teams comprised of Followers of Zintl, and are often used as mounts by Zintl Cavaliers.

Section-stub. This key section of the article is incomplete. You can help the Guild Wars 2 Wiki by expanding it.
Reason: May be missing drops, if not, remove stub tag