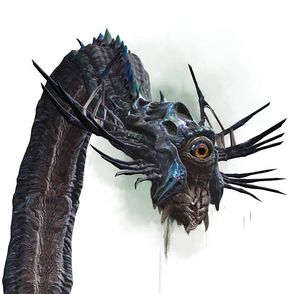 Krakens[1] are large, cyclopean, tentacled sea creatures. In the past, they were most commonly seen in the Jade Sea, though they were said to thrive in the seas around Elona. When the Jade Sea froze, like the other local sea life, krakens quickly adapted to life above water, floating above the solidified jade water.

Kraken eyes are known to contain strong magic within them, and have been used by Luxons for both enchanting weaponry as well as making jewelry.