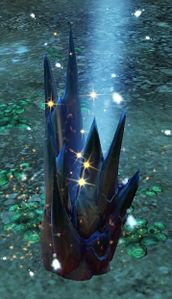 Reflecting Crystals are bundles which, when carried by a player, reflect incoming projectile attacks back to their source. They are found in several dungeons and are sometimes pivotal to successfully completing the dungeon.

Reflecting Crystals can be found in various areas within the Ruined City of Arah. They are particularly useful in combating Orrian Guard Turrets, but they are also extremely helpful if not required to defeat the Legendary Jotun Stargazer.