Am I missing something here, or are these reverts pointless because there are 2 districts with asura gates, circled on this map? 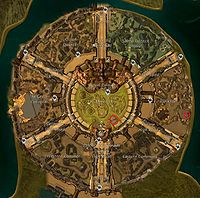 The map definitely shows only 2 districts with asura gates at this time, we can speculate hundred times over whether there are more, but Rurikton and The Upper City are 2 districts that feature an asura gate. It's definitely not the only district.
Also, if you want speculation: "The Ascalonian district is known to contain a hospital for soldiers of Ebonhawke." Very, very, very likely that this particular asura gate leads to Ebonhawke. - Infinite - talk 14:18, 14 June 2011 (UTC)

First of all, yes, there may be more Asura gates, but the only publicly operated ones are listed on the map (who knows how many Asura could have devised rings like in Edge of Destiny?). Second, Rurikton is a district, while this wiki has not labeled the upper city as a district. Therefore, Rurikton is the only district with one. :) 98.23.18.36 19:08, 14 June 2011 (UTC)

"The city is circular in design and divided into six sections and the central palace. The Ascalonians, Canthans, Elonians, and Krytans each have their own districts in the city, and the other two districts belong to stores and festival activities." That's specifically where this wiki labels Divinity's Reach as having 6 districts, of which the upper city is not one. :) 98.23.18.36 19:10, 14 June 2011 (UTC)

This makes sense. Only one district has an asura gate at this time. This makes Rurikton a unique district regarding it. - Infinite - talk 19:19, 14 June 2011 (UTC)

Oh no, Michiel, it's all semantics. :) May I add that little tidbit about Rurikton now? Of course, the bit about it linking to Ebonhawke is my own speculation (which will be left off the page). I just personally think that, seeing as how the Asura gate in the upper city does not advertise linking to Ebonhawke. Also, the hospital for Ebonhawke soldiers is in Rurikton... the only (currently known) district with an Asura gate. :) Just my 2 cents hehe. (Again I say, I'm not going to mention Ebonhawke, but I do want to mention it being the only district to our knowledge to have an Asura Gate) 98.23.18.36 21:29, 14 June 2011 (UTC)

Although I made the reverts on this matter, I fully agree with you. It makes much sense that the Asura gate (which is clearly located in Rurikton) link to Ebonhawke. However, the map doesn't prove anything, only that there is (or might be) an Asura Gate in that district. We have currently no information where it links to, so thats why I called it speculation and reverted the edits. -- Cyan

Cyan, did you actually READ what I put in the article before you reverted it? I said nothing about Ebonhawke. I merely stated there was an Asura gate in Rurikton (the only one in a district that we know of). :) Obviously it linking to Ebonhawke is speculation, that's why I never included it. 98.23.18.36 11:58, 15 June 2011 (UTC)

I have to admit that I reverted a little resolute. I did read what you stated and I also saw what you wrote down in the summary showing up in the recent changes. Now, that there might be an Asura Gate in Rurikton is in many eyes (and maybe also in my eyes) almost sure, however, we have no official source that there is one. We don't have a screenshot of the gate itself, and we also don't have any statements from ArenaNet itself that there is one. So, I reverted it for speculation, although I share your opinion that it is most likely to be there. Last, I support thinking out loud, don't feel any pressure to stop with it =) -- Cyan

We have a map with an asura gate symbol on it. That's not speculation. pling