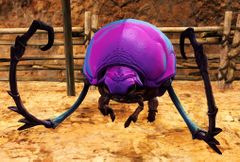 His name is Petey. He's cold sensitive, but otherwise an excellent specimen...slash pet.

Petey is a roller beetle that slowly grew out of Gorrik's skin. He can initially be found alongside Gorrik at the Zelbahn Garrison in the Allied Encampment but is later adopted as a mount by the Pact Commander to combat the Scarab Plague.

Following Palawa Joko's theft of Scarab Plague samples from Rata Primus to breed a new generation of the ancient pestilence in 1331 AE, the asuran entomologist Gorrik began investigating countermeasures to the plague. Gorrik's research led him to discovering that the scarabs would only use humans as hosts. To prove his theory, he planted a new species of beetle under his skin to incubate it.[1] He survived the process and named the beetle Petey, taking note that the beetle was cold sensitive.

After arriving with the rest of the Pact Commander's allies to the Domain of Kourna to set up a local base of operations and stop Joko, Gorrik noticed that Petey had stopped eating. Before the asura could investigate the matter, however, the beetle jumped out from under his skin, ate the nearby plague samples and grew bigger. Gorrik decided to test his theory on strengthening Petey and asked the Commander to find various scattered stashes with strength-enhancing draughts which would help with Petey's last mutation and incubation.[2]

Once Petey had consumed the draughts, he grew bigger and stronger as Gorrik had theorized and no longer showed signs of being in distress. By the time the Commander tried to place a saddle built by Blish on him, however, Petey rejected the Commander. Gorrik suggested that the Commander should try bonding with Petey first by providing the roller beetle with a "perfect meal" made from multiple creatures roaming Tyria. Upon being fed, Petey finally took a liking to the Commander and allowed himself to be saddled, becoming a reliable mount with which the Commander could combat the spread of the Scarab Plague in Kourna as Petey proved his effectiveness in clearing scarabs wherever he rolled.

Ready for your saddle? (If Beetle Saddle almost completed)