End the plague experiments is a level 80 group event that occurs in Gandara, the Moon Fortress as part of the Containing the Scarab Plague meta event.

These are the expected rewards for a level 80 player. 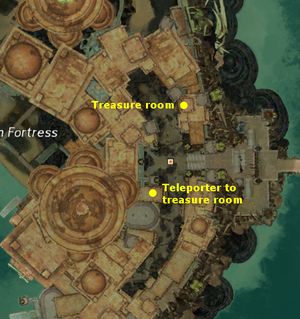 Locations of the Access Panels after completion of the event.

Attack the Champion Awakened Lead Researcher. When she reaches 10%, she will turn invulnerable, summon the Pestilent Golem, and climb inside.

The Golem is a straightforward fight. Every 25% of its health (75, 50, 25%) it will spawn several Necrotic Distillates; if these are not destroyed quickly, the golem will release a shower of slow-moving pink projectiles which, upon hitting the distillates, will create a large and very deadly AoE at each. Do not use Electromagical Pulse (skill) on the distillates. Doing so will cause them to immediately release their AoE.

When the Golem is dead the Lead Researcher will be ejected, still at 10% health. Kill her.

With the threat out of the way, it's time to destroy the Plague Experiments. Follow the

cogs on the map into various rooms and destroy them all. When all are destroyed, the event will be over and the treasure room will become accessible (see map). Consume your Access Card reward from the event to be granted teleporter permissions.

Section-stub. This key section of the article is incomplete. You can help the Guild Wars 2 Wiki by expanding it.
Reason: May be missing foes