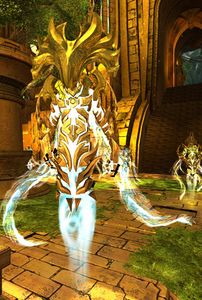 Do you see? These runes spell out our charter, our purpose, our sworn duty as handed down by the Forgotten themselves.

The Luminate is the ruler of the city of Tarir and has Luminate's Throne named after her. The last Forgotten delegated her with leadership over the Exalted and made her the keeper of all knowledge entrusted to the Exalted whose mission involves protecting Glint's legacy and seeing it come to fruition.[1]

The Luminate was once a human of flesh and blood whose friends and family had become the first Zephyrites. She was recruited to carry on the Forgotten's work as a protector of Glint's legacy. After passing through Forgotten trials to prove her worthiness to the cause, the Luminate and her fellow candidates were turned into beings of energy using Bloodstone magic and rituals. Their energy was encased in magical armor which made them nigh immortal.

Following their rebirth, the Exalted helped build their base of operations, Tarir, in the Heart of Maguuma and listened to the speech of the last Forgotten who, before departing from Tyria, charted out the Exalted's purpose and appointed the Luminate as their leader.[1] During this time, the Exalted allied themselves with the asura of Rata Novus, which was established by individuals like Zinn to study and combat the Elder Dragons, and shared their races' respective knowledge to prepare for the coming battle with the dragons.

Once the Exalted were satisfied with the establishment of Tarir and its outposts, they went into hibernation in wait of Glint's legacy to require them.[2]

Approximately 200 years later, in 1328 AE, the Luminate and the rest of the Exalted awakened from their slumber as they sensed the approach of Glint's Egg. However, they discovered that Glint had perished and that the outskirts of Tarir were now infested with ever-increasing numbers of the Mordrem, minions of the Elder Dragon Mordremoth. They began the task of reactivating their outposts to power up Tarir's defenses against the invading dragon minions.

The Luminate, along with several other Exalted, welcomed the Pact Commander who arrived in Tarir carrying the egg. She and Ruka the Wanderer convinced the Commander that they had the egg's best interests at heart and guided the Commander to the trial chambers where the Commander would have to prove their worth to Glint's cause just like the Exalted once had.

Once the Commander had successfully passed the trials and left the egg in Tarir while heading deeper into the jungle to confront Mordremoth, the Luminate and the rest of the Exalted continued powering up Tarir's defenses and protecting the egg from harm.

Several months after the campaign against Mordremoth had ended, Glint's egg hatched. Immediately afterwards, the defenses of the egg chamber mysteriously malfunctioned, and the hatchling was assaulted by Destroyers, minions of the Elder Dragon Primordus. The Luminate arrived just in time to shield the hatchling with her magic and began to reactivate the defenses while urging the Pact Commander, who had arrived upon the scene, to keep the Destroyers away from the hatchling. Thanks to the Commander and Lazarus, who had also conveniently arrived in the chamber to lend a hand, the Destroyers were thwarted.

After hearing the Commander call Lazarus a mursaat, the Luminate suggested to get rid of Lazarus as she remembered the Forgotten informing the Exalted about the mursaat's past, treacherous deeds. Despite Lazarus claiming to have changed his ways and wanting to join the Commander in the fight against the Elder Dragons, the Luminate remained skeptical. However, when the Commander's companion, Marjory Delaqua, volunteered to accompany Lazarus and learn if his motives to aid the party were genuine, the Luminate did not pursue the matter further. Soon afterwards, the Commander named the hatchling Aurene, claiming that they "just knew" the name, and let Caithe watch over the hatchling in the meantime.

The Commander returned to Tarir to check in on Aurene while in between missions and informed the Luminate that Aurene had contacted them mentally. After recovering from this surprising revelation, the Luminate suggested that the Commander should nurture and strengthen this growing bond and trust between them by taking Aurene through a series of challenges set up by the Exalted to demonstrate various virtues to the hatchling. Once the Commander and Aurene had successfully passed the trials, the Luminate congratulated them, only to be jumped on by the rambunctious hatchling, after which she departed hastily.

While the Pact Commander traveled to the Crystal Desert in 1330 AE to stop the rogue god Balthazar from killing the Elder Dragon Kralkatorrik and destroying Tyria in the process, the Luminate watched over Aurene. However, Aurene began acting more and more aggressively over time, and Caithe and the Luminate discussed the issue with Taimi who had been in contact with the Commander via a remote communication device.

They learned that Aurene was reacting to sensing her brother Vlast's death at the hands of Balthazar, and the trio did their best to try to calm the hatchling down. When Aurene sensed that Balthazar was about to kill the Commander, however, she escaped from Tarir and flew to the Crystal Desert while her caretakers could do nothing but watch helplessly as she departed.[3]

Sometime after Aurene's ascension to take over Kralkatorrik's position as an Elder Dragon, the Luminate became aware of the event. During the war between the allied forces led by the Pact Commander, Primordus's destroyers, and Jormag's icebrood led by Ryland Steelcatcher in 1333 AE, the Luminate sent Dulann, another Exalted, as her envoy to coordinate the defense of Tyria with other races' envoys.

She also sent reinforcements for the allied forces to the Eye of the North along with a letter to the Commander in which she pointed out that the Exalted could not sit idly by if the current era witnessed the conclusion of Glint's prophecy.