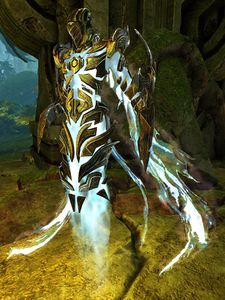 I am Ruka the Wanderer, of the Exalted. We are charged with preserving life from the predations of Elder Dragons.

Ruka the Wanderer is an Exalted seeking the source of energy that's emanating from Glint's egg. After the egg is recovered by the Pact Commander, he guides the Commander through Tarir into trials established by the Forgotten. He also occasionally visits the Priory camp near Northwatch Descent's outpost and Nuhoch Nelli overlooking Jawatl Grounds.

Ruka was once a human of flesh and blood whose friends and family had become the first Zephyrites. He was recruited to carry on the Forgotten's work as a protector of Glint's legacy. After passing through Forgotten trials to prove his worthiness to the cause, Ruka and his fellow candidates were turned into beings of energy using Bloodstone magic and rituals. Their energy was encased in magical armor which made them nigh immortal.

Following their rebirth, the Exalted helped build their base of operations, Tarir, in the Heart of Maguuma and listened to the speech of the last Forgotten who, before departing from Tyria, charted out the Exalted's purpose and appointed the Luminate as their leader.[1] During this time, the Exalted allied themselves with the asura of Rata Novus, which was established by individuals like Zinn to study and combat the Elder Dragons, and shared their races' respective knowledge to prepare for the coming battle with the dragons.

Once the Exalted were satisfied with the establishment of Tarir and its outposts, they went into hibernation in wait of Glint's legacy to require them.

Approximately 200 years later, in 1328 AE, Ruka and the rest of the Exalted awakened from their slumber as they sensed the approach of Glint's Egg. However, they discovered that Glint had perished and that the outskirts of Tarir were now infested with ever-increasing numbers of the Mordrem, minions of the Elder Dragon Mordremoth. They began the task of reactivating their outposts to power up Tarir's defenses against the invading dragon minions.

Ruka traversed Auric Basin when he noticed Exalted pylons reacting to the presence of Glint's legacy. He ran into Pact squads as well as the Pact Commander's party but initially avoided them as he did not want the trail to get cold. However, he was eventually confronted by the Commander's party and, after introductions, he and the party realized they were on the same side. The Commander revealed that what Ruka had sensed was Glint's egg, and they joined forces to continue the search.

They eventually found the egg and its carrier, the sylvari Caithe, being ambushed by a monstrous Faolain who had succumbed to Mordremoth's influence. While the rest of the party faced Faolain, the Commander picked up the egg and felt power coursing through it. Ruka noticed the change and asked the Commander to follow his lead so they could escape. Faolain gave chase soon after, however, but the Commander managed to avoid capture by following Ruka's instructions.

Once the pair had managed to shake off Faolain, the Commander questioned Ruka's intentions. The Exalted revealed that he did not want to possess the egg and was only interested in protecting it. Ruka realized that the egg had chosen the Commander as its champion although he admitted to not knowing how it had happened; instead, he urged the Commander to head for Tarir where the egg would be safe. Although the Commander remained skeptical, Ruka urged the Commander to trust their instincts on the matter.

After the Commander had ventured deeper into the jungle to confront Mordremoth, Ruka and the rest of the Exalted continued powering up Tarir's defenses and protecting the egg from harm. Ruka was often seen wandering near a Priory encampment and comforting Nuhoch Nelli who had lost her village to the Mordrem.

In 1329 AE, several months after the campaign against Mordremoth had ended, the Exalted sensed that Glint's second scion was about hatch from the egg. Ruka contacted the Pact Commander's friends in hopes that they could let the Commander know about it. Ruka was among the first to welcome the Commander to Tarir, and let everyone present know that only the Commander could enter the egg chamber due to its magical protection. As soon as the Commander got into the chamber and witnessed the hatching, however, the chamber's defenses mysteriously malfunctioned, and the hatchling was assaulted by Destroyers, minions of the Elder Dragon Primordus.

While the Luminate and the mursaat Lazarus came to the Commander and hatchling's aid as the magical barrier dropped, Ruka assisted Caithe and Marjory Delaqua in defending the entrance to the chamber. He did not appear in the chamber after the Destroyers had been defeated, however, and he only learned later on that the Commander had named the hatchling Aurene.

After dying in the rogue god Balthazar's ambush in 1330 AE, the Pact Commander's soul appeared in the Domain of the Lost where all spirits which experience sudden, violent deaths end up in. While recovering their name and remembering their purpose to be properly judged, the Commander was subjected to fragmented visions of past deeds, including the meeting with Ruka.