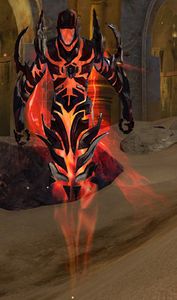 Forged Exalted are early prototypes of Forged made by Balthazar using the Exalted as a base. They can be found dormant, guarding the entrance to the Forgotten City of Kesho. Before they become active, their red glow (different from the usual green, yellow or blue glow Exalted give off) can hint at the corruption.

Section-stub. This key section of the article is incomplete. You can help the Guild Wars 2 Wiki by expanding it.
Reason: Need to know what these do