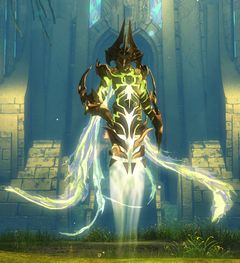 I will defend this sacred ground with my life.

Sadizi is an Exalted tasked with raising Glint's first scion Vlast in Kesho. When Balthazar and Palawa Joko invaded the hidden city and began experimenting on the Exalted to create their own Forged army, Sadizi sealed himself within a protective chamber to avoid being turned. He was found later by the Pact Commander who convinced him that they were on the same side. Sadizi then revealed information about the Forgotten's intricate plan titled the Legacy as well as the origins of the Forged. When Sadizi sensed that the Forged were about to follow the Commander into Kesho, he urged the Commander to leave and stayed behind to seal the entrance to the city so none would be able to abuse its knowledge ever again.