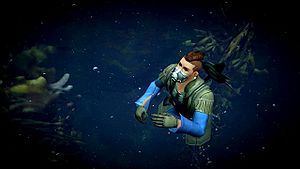 A character displaying the breathing apparatus.

A breathing apparatus is the headgear armor your character uses while underwater. It completely replaces all stats of terrestrial headgear, including defensive and rune bonuses. Your character automatically switches between the land and water headgear as needed. All characters are given a light, medium, or heavy Aqua Breather as starting equipment upon character creation. Higher level breathing apparatuses can be obtained as outlined below:

Underwater Breathing apparatus are available at all rarities (except legendary) and all levels.

Level 80 ascended breathers are the best available. They are Account Bound, available with all standard ascended prefixes and require recipes to craft. Recipes may be purchased with Fractal Relics, or from the Trading Post. Diver's Breather are buyable for Swim-Speed Infusion +10.

Stat-selectable ascended breathers are also available from Slooshoo in Bitterfrost Frontier for Unbound Magic and Fresh Winterberries, or from Dive Master Astora for Swim-Speed Infusions.

The karma costs are the same for light, medium, and heavy versions. Creator Zee and Qualdup sell the uncommon Black Earth skins.

Recipe: Water Filter (level 20) can be purchased from