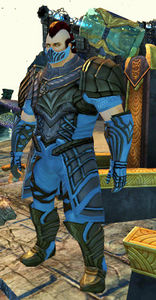 Explorer Gavbeorn Serpentslayer is a member of the Durmand Priory working with the Pact. He is located at Gavbeorn's Landing in the Winterknell Shore area of Cursed Shore and has been tasked with securing the docks there to facilitate Pact movement by sea.

When the camp is under Pact control, he will sell items as a karma merchant. If players find that the camp is overrun, it can easily be cleared by one's self by pulling risen one or a few at a time with ranged attacks.

Welcome to my landing. Getting here was a harrowing journey, to say the least, but we made it further than anyone ever thought we would!

You have any goods to spare?

The name says it all, my friend. I'm Gavbeorn and this is where I landed. We're attempting to secure the seas for Pact movement here upon the Cursed Shore.

What's the news on the Pact front?

What is this place?

What's the news on the Pact front? (if the Temple of Melandru is under Pact control)

Word is a band of travelers have secured a great prize! The temple of Melandru itself has been tamed. At least, for now.

What do you mean, "for now?

A place as powerful as that will have strong defenders. They're goign to have their hands full keeping it secure. It's a short way to the west if you want to help.

I may do that.

Any Pact missions underway right now? (if any of the Temple of Melandru events are ongoing)

Certainly, not long ago an expedition set out toward the west in an attempt to tame the temple of Melandru. They could use all the study backs they can get.

West, you say? Maybe I'll look into it.

During Defend Gavbeorn's Landing from invading Risen
We must hold this position! Or, die trying!

Working on it! The holding, that is. Not the dying.

Anomaly:
All the equipment's flavor text references Magister Izzmek instead of Gavbeorn
Retrieved from "https://wiki.guildwars2.com/index.php?title=Explorer_Gavbeorn_Serpentslayer&oldid=2422388"
Categories: