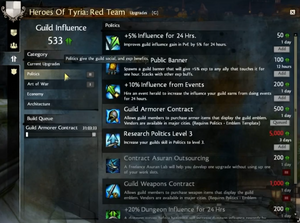 Influence was once the currency that guilds spent to purchase boons and other guild-wide upgrades. Influence was earned by participating in events, pvp, or solo content while representing a guild. Coin could also be exchanged for influence at the Guild Promoter.

The following table shows the remaining usecases. The rest of the page accounts for the discontinued/historical content.

The primary source of influence was through participation in PvE or PvP:

There were limits to how much influence each account could add to the guilds represented by various characters:

Anomaly:
Winning A Dragon Ball Arena Match counts as a PvP victory and will award the subsequent influence.

Anomaly:
Completing instances in Fractals of the Mists awards influence as if completing a dungeon, however it is not shown in the influence breakdown.

Guild Promoters
Each letter bought from this NPC costs 20

One-time benefit acquired from purchasing a second account. This started a few weeks prior to Heart of Thorns announcement

One-time benefit acquired from the Heroic Edition or for buying Guild Wars 2 during a promotion from the November 27th until the December 3rd, 2013.

Influence can be spent in the guild panel in four categories: Architecture, The Art of War, Economy, and Politics. Your guild must have enough influence (and guild merits for high-level upgrades) to pay for an upgrade before it can be added to the queue; this amount is refunded if the queued upgrade is removed from the queue. However, you can never recover any influence spent to speed completion of upgrades.

Speeding up an upgrade costs 250% of the original cost of the upgrade, and progresses the build by 25% of the total build time each time. If the build has less than 25% remaining, the speed-up cost will be adjusted to compensate at a rate of 10% influence per 1% of build time. It is possible to speed an upgrade from start to finish if enough influence is available. For example, speeding up a Guild Bounty Hunt consumable by 3 hours (25% of the 12 hour build time) will cost you 500 influence (250% of the 200 influence original cost to build), and speeding it up from start to finish will cost 2,000 influence in total.

Architectural upgrades primarily involve adding and upgrading shared storage (e.g. the Guild Vault) and are among the more expensive and time-consuming features. This category also includes the Guild Workshop, allowing your guild to work on two upgrades at a time.

Art of War upgrades include buffs for WvW.