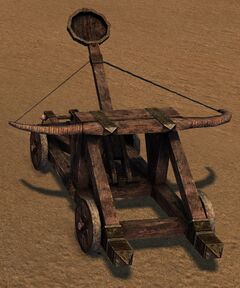 Catapults are a World versus World siege weapon that fires large boulders or gravel to deal area damage with a maximum range of 4,000 units and an AoE target cap of 50. The primary purpose of catapults is the destruction of walls, but they can also deal moderate damage to gates, siege weapons and infantry. It can also cause knockback. Catapults’ boulder shots deal damage based on their charge level. The longer the catapult is charged, the more damage it deals.

Regular catapults are built with Catapult Blueprints, which can be bought from a Siege Master for either 12

. They also come in a variety of containers. Once deployed, they require 40

(50 total) to build. They are built with Superior Catapult Blueprints, which are made in the mystic forge, bought from various merchants, and found in various containers.

Guild catapults are functionally the same as superior catapults, but they also have a different skin that displays the emblem of the owner's guild. They require 40 supply to build. They can be built with Guild Catapult Blueprints, two of which may be purchased for 12

from a Guild commendation trader. These may also be crafted through Scribing.

The speed with which a catapult destroys a target depends on the type of catapult, the distance to target, the type of target and the proficiency of the operator.