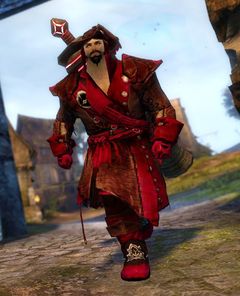 Grymm Svaard is an offensive Mist Champion available for the Battle of Champion's Dusk.

Grymm Svaard, along with his twin brother Bronn, was a norn sword-for-hire aboard the Salma's Grace in 1229 AE. He is described as having salt-gold hair that capped a broad face, and a long, braided beard adorning a wide jaw. The brothers were actually Priory Explorers, with the mission of learning all they could about the Orrians. After the Salma's Grace joined forces with Cobiah Marriner to fight the Orrian xebec, Harbinger, they remained with Cobiah's crew until hired by Captain Yomm in 1237 AE. During the Great Krytan Blockade of 1256 AE, they joined Captain Isaye aboard the Nomad II to fight Captain Whiting's Risen aboard the Indomitable, where he had to kill his brother who was turned into a Risen during the battle.