The Shell of Insanity

The Shell of Insanity 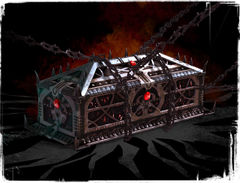 Part of
The Reliquary
Interact
Yes
Destructible
No

The Shell of Insanity, also known as The Reliquary, is a box in which Mad King Thorn locked his son, Edrick Thorn, as punishment after a failed coup attempt. Eventually, it was found by Magister Tassi, leading into the living story Blood and Madness.

During the life of King Oswald Thorn, The Shell of Insanity was used to lock up subjects of the Mad King for one reason or another, with one former occupant having reportedly eaten his own face. Bloody Prince Edrick is the last occupant, imprisoned on the eve of his father's dethronement, after torching a village and instigating the coup that lead to the execution of King Thorn.

After this, The Shell of Insanity was meant to be sent to Istan, but was stolen and restolen over the years until it reached The Nolani Academy of the Arcane Arts, where it was studied until the Third Guild War. From that point, The Reliquary remained dormant in the ruins through the war and the eventual building of the Black Citadel, until it was rediscovered by Magister Tassi in her quest to study the Thorn Family history.

At the culmination of the Blood and Madness living story, Magister Tassi resealed The Shell of Insanity with an alchemical candy glaze derived from Candy Corn. However, she commented that she could already see the seal slowly deteriorating and could not be certain how long it would remain.