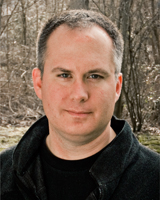 John Ryan is a writer at ArenaNet. Before joining ArenaNet in 2010, he worked as a writer for MSNBC.com, Microsoft Game Studios, MSN Games, and Xbox LIVE. He is married and lives in the Seattle area. He was once nearly thrown out of the British Museum. When he's not putting words in the mouths of Guild Wars 2 characters, he can be found gaming, writing, or being scowled at by his cats.

John Ryan wrote the narrative VO and text for the Blood and Madness release along with the inscription on the Dead Drop Shield Skin.[1] He currently works as a Story Director at Tactile Games.