This article is about the Super Adventure Box NPC. For the mount skill, see Turtle (skill). 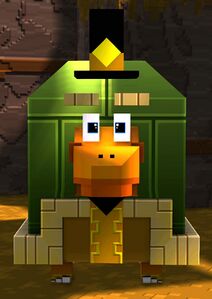 Turtles are enemies found in Super Adventure Box. Hitting them with a weapon flips them over, allowing players to stand on them, making crossing poisonous or fast-flowing waters possible without taking damage. They will bite at players who get too close to them if not flipped over however.