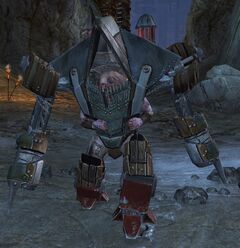 Dredge Mining Suits are enemy dredge. They can summon multiples dredges to help them in battle.

Section-stub. This key section of the article is incomplete. You can help the Guild Wars 2 Wiki by expanding it.
Reason: Probably more