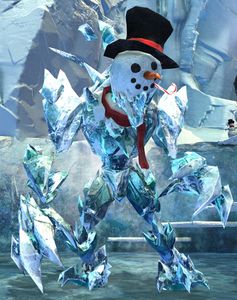 This day is mine, this lair is mine. You dare to challenge me?

Freezie, the Greatest Snowman Ever Made,[1] is the leader of the snowmen and the boss of the Secret Lair of the Snowmen.

During a particularly cold winter following the death of Vizier Khilbron and the routing of the titans circa 1072 AE,[1] the Hero responsible for saving Tyria from Khilbron was tasked by Joy, a priestess of Dwayna, to seek out Scrappy Jhim in Lion's Arch. The priestess's intention was for the Hero to help Jhim build a snowman to not only cheer the boy up and honor Dwayna but to add another heroic snowman—also known as a Brrrl—to Tyria to keep Grenth's minions—the joyless Grentches—at bay and ensure that spring would arrive on schedule.

After acquiring two pieces of coal harvested from defeated titans by Vanguard Kyle, a seemingly corncob pipe which was actually made from the bones of a giant felled by King Jalis Ironhammer of the Deldrimor dwarves, and a magician's hat once worn by Magi Malaquire, the Hero returned to Jhim who used the magical ingredients as well as a button in his possession to make the finishing touches on the snowman. The combination of magical ingredients and the wish of the innocent child gave life to the sentient Brrrl whom Jhim dubbed Freezie, the greatest snowman ever made.

After coming to life, Freezie helped spread Wintersday cheer to Grentches and Humbugs which had been terrorizing Nebo Terrace, ultimately driving the minions of Grenth back.[1] He eventually traveled to the Secret Lair of the Snowmen where all Brrrls like him migrated to between Wintersdays to protect it from Grenth's influence,[2] although he promised to return to Lion's Arch the following winter.

While in the north, Freezie became the leader of the snowmen. He defended the lair alongside other Brrrls and festive adventurers from a force of invading Grentches led by Grentchus Magnus and adventurers who did not believe in Wintersday cheer.[3][4] He also accompanied several Brrrls as they invaded the Underworld to take back the presents which the Grentches had stolen from innocent children all over Tyria.

During the Destroyers' first modern stirrings circa 1078 AE, Freezie and his fellow Brrrls defended the lair of the snowmen from raiders led by the dwarf Koris Deeprunner who were searching for King Hundar's legendary treasure deep within the cavern.

Dwayna's absence and her lessening influence on Tyria upon her departure deeper into the Mists ended up affecting Freezie whose heart broke when he believed that the goddess had abandoned her faithful snowmen. His sorrow and growing despair turned him cruel, and he began turning his once joyful snowman companions into cold-hearted minions of ice, twisting the purpose of Wintersday to suit his new, jaded outlook on life. One of the snowmen, Cob, managed to flee the lair and entered Divinity's Reach during the Wintersday of 1331 AE, asking able heroes to enter a portal he had made to stop Freezie before the would-be tyrant's plans came to fruition. Several adventurers answered Cob's call and restored the turned snowmen to their former selves, including Jolly Donny who provided the group with intel and led them to face Freezie himself in the heart of the lair.

After a fierce clash, the adventurers were able to slowly fill Freezie's frozen heart with snow and returned his Wintersday cheer. Ashamed of what his broken heart had made him do, Freezie apologized to the adventurers and promised to never forget what he was supposed to protect. Following his apology, the great snowman engaged in jolly snowball fights with any festive adventurer who wished to challenge him.

After defeating him
Merry Wintersday, friend! I was so focused on Dwayna's absence that I nearly forgot what I was protecting. Thanks for reminding me!