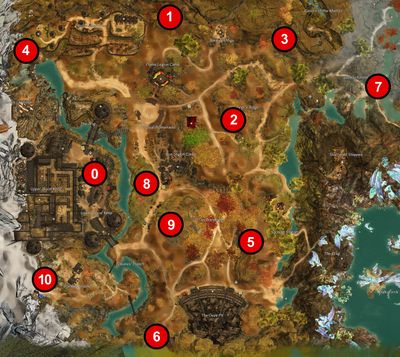 Brand Stomped is a Prologue: Bound by Blood achievement where you help repair Broken Brand Stompers around Grothmar Valley.

At each location, interact with the Broken Brand Stomper to begin the repair process. The time remaining is visualized above the stomper as a circle which fills up over the course of 30 seconds. You can also see the exact amount of time remaining by hovering your mouse over the Repair Golems Deployed effect that is granted by interacting with the broken stomper.

There are two types of attacks on the stomper while you are repairing, but both involve exploding creatures which will stop the repair procedure. In the first type, Branded Devourers shoot exploding grubs towards the stomper. When the grub lands, an AoE expands around them. When the AoE under the grub is full, the grub explodes, and the repair golems stop working. In the second type, exploding constructs slowly move towards the brand stomper, with an expanding AoE under them. Again, when the AoE fills completely, they will explode and cancel the repairing process.