This article is about the equine species. For the racing NPC, see Horse (racer).

Horses are four-legged equines which are presently not seen in the accessible regions of Tyria. They have been historically used by humans as mounts and beasts of burden, and are well known by many humans and other Central Tyrian races.

The earliest records of horses show that they existed on Cantha during the reign of Emperor Kaineng Tah. According to Loremaster Ermenred, the emperor was renowned for his horseback riding but died under mysterious circumstances while hunting in 464 BE with reports claiming that his horse had gone wild and killed him.[1]

As humanity expanded to Orr and Kryta, they used horses for various tasks in their new colonies as well, though it is unclear whether they brought horses with them or if horses were native in other lands. Both Orrians and Krytans were known to have horses for riding as well, both in military and leisure use in the case of the latter.[2][3] Mad King Thorn is known to have had many horsemen under his command in life and undeath. It is unclear whether Ascalonians or Elonians ever had horses in their nations; however, they have made occasional references to them so it is clear they knew of horses at the very least. Similarly, Elonians have in the past enslaved centaurs to work them in the same manner as they worked horses.

In 1319 AE, Caithe, Logan Thackeray and Rytlock Brimstone used an old asura gate to flee from destroyers in dwarven ruins. While calibrating the gate to take them to a safe location, they saw glimpses of other Tyrian regions, including a grassy plain with what they identified as wild horses.[4] As recently as 1325 AE, Krytans may have used equines to pull carts and carriages in Queensdale.[5] 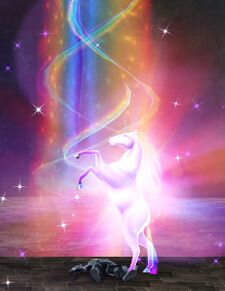 Of all races on Tyria, humanity are the most impacted by the existence of horses. Human children view ponies as cute, contrasting them with the fierce looks of centaurs.[6] Many adult humans have compared centaurs to "horse-men", even different breeds of horses, and deridingly called them plough horses or ponies.[7][8][9][10][11] In modern Kryta, several carnival decorations feature horses ridden by knights and princesses in playful light, as well as works of art such as rocking horses or in common phrases. In Cantha, one of the twelve main celestials is the Celestial Horse, revered during the Canthan New Year festivities.

The impact of horses is not limited to humans, however. Charr and sylvari have similarly taken up to referring to centaurs as "ponies" or "horse-men" in recent years,[12][13] while skritt call them "horsefolk."[14] Ogres equate taming feisty Rock Dogs with taming bad-tempered horses,[15] while asura compare centaurs' scent with horses.[16] Although it is unknown for sure who named the dwarven-built Iron Horse Mines, it nevertheless raises the possibility that the dwarves were aware of horses and their uses.

Tyrians tell tales of mythical winged horses known as pegasi which are rumored to be good, gentle, and always eager to help those pure of heart.[17] Other mythical horse-like creatures include unicorns, one-horned creatures rumored to have magical power residing within their horns.[18]