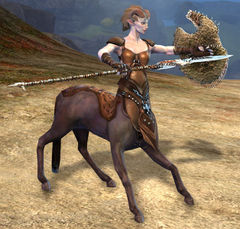 Veteran Harathi Stampeders are centaurs of the Harathi clan who run around the map in groups.

Listed abilities and appearances are copied from other types of centaur, so many sets are possible:

Section-stub. This key section of the article is incomplete. You can help the Guild Wars 2 Wiki by expanding it.
Reason: Missing stolen skills
Retrieved from "https://wiki.guildwars2.com/index.php?title=Veteran_Harathi_Stampeder&oldid=1590006"
Categories: