This article is about a hylek tribe. For the hylek sun god, see Zintl. 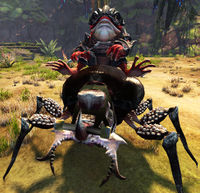 The Zintl are a tribe which is made up mostly of imperialistic hylek zealots that ride Giant Beetles and worship the hylek sun god, Zintl. They were first encountered in 1327 AE, having taken over the Charnel Grounds in the Silverwastes and forcing prisoners to tend to their mounts.

In 1328 AE, the Zintl made themselves known to the Itzel of Jaka Itzel, seemingly bearing goodwill to their fellow hylek after a Legendary Wyvern attacked the latter's village. However, it was discovered that the Zintl had used wyvern eggs taken from the Wyvern Cliffs to agitate the wyvern, hoping it would destroy Jaka Itzel so that the Zintl could more easily convert and enslave the Itzel.

They have also established themselves just outside Teku Nuhoch, where they are putting pressure on the Nuhoch living there.