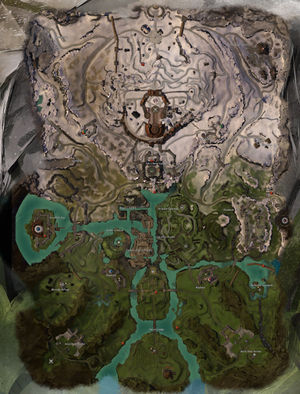 The Borderlands are the launching point for many adventurers into The Mists. With a heavily fortified location that climbs all the way to the peak of a mountain, it can be a difficult place for enemies to assault and an excellent place for would-be heroes to get their first battle scars.

The Alpine Borderlands are two identical maps in World versus World (Green and Blue; Red is Desert Borderlands), with each map belonging to one of the participating worlds. Players on their own borderland spawn at the Citadel towards the north of the map; players from the other two worlds spawn in either the south-east or south-west corners of the map. Unless noted otherwise, the 2 Alpine Borderlands maps share identical features.

All pets are located near the same Point of Interest within a particular Borderland.