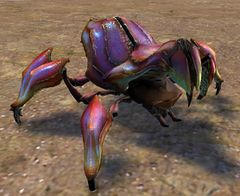 Scarabs are insects found within the Crystal Desert. There are different variations of scarabs, from striped to blood red. They can be seen around hives or roaming in small groups.

Section-stub. This key section of the article is incomplete. You can help the Guild Wars 2 Wiki by expanding it.
Reason: Missing locations

Bug:
Incoming disables while flying will occasionally fail to ground the scarab, leaving the scarab stuck in its flying animations without any skills to use.

Bug:
Wind Gust grants swiftness on-cast to a player or NPC a scarab has aggroed.
Scarab