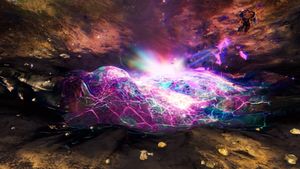 To mine the brandstones, use your special action key to bring up the Multitool skills and:

Occasionally, a meteorite that lands in the Plains of Jarin will spawn a large targetable Brandstone on the surface along with the event

Destroy the crystal encasing the Brandstone before it disintegrates (80). At this site, skills 1 and 2 will do nothing. Instead: