Revenant: The Master of the Mists

Originally published at Revenant: The Master of the Mists.

Hello, Tyrians! I'm Roy Cronacher, and alongside my team, I've been working on bringing the revenant—the new profession introduced in Guild Wars 2: Heart of Thorns™—to life. We know you're excited to learn about the revenant, and it's my privilege to finally start sharing some of the juicy details.

So, It All Begins

The revenant is the ninth profession, added into Guild Wars 2 as a unique archetype not seen in other games. Revenants are heavily armored masters of the Mists with abilities that allow them to harness and manipulate energy in order to perform immense attacks. They invoke powers from legends of the past to dominate foes and unleash chaos on the field of battle. Those familiar with lore from the original gw1:Guild Wars will see many familiar faces reappearing as legends, which you can invoke through this profession.

Here are some quick overview specifics:

Between now and the launch of the expansion, you'll learn a lot about the revenant's skills and abilities. We'll start that process today by talking about the following:

Connection to the Mists

As mentioned, this profession's unique theme is its constant tie to the Mists, but how does that affect its gameplay?

Let's start with the basics. A revenant can select from a pool of legends—epic characters from the past that you can invoke power from—and slot two different legends at a time. With this constant connection to the Mists, you'll always have one active legend and one inactive legend. The current active legend will determine the skills on the right half of your skill bar. It's similar to weapon swapping, but instead it affects your healing, utility, and elite skills. Not only will the legend you select determine your skills, but you'll have an energy bar tied to your currently invoked legend.

This energy bar is a new resource that the revenant relies on in order to use skills. Some skills will have a low energy cost, allowing you to use them more often, while others have a large cost with a very large payoff. When you invoke a new legend, you'll begin at half energy and generate more energy over time. This creates a push-and-pull feel with the energy that you manage as you use your skills.

Revenants also have upkeep skills, which you may remember from the original Guild Wars. Certain legends have skills available that will cause you to lose the ability to regenerate energy or even put you into a degeneration state while they remain active. These skills will last until you run out of energy or toggle them off. As you can see in the screenshot, there are pips that represent your current state of upkeep. This allows us to have another skill type in Guild Wars 2 with unique functionality and reinforce the revenant's focus on energy management.

A revenant's weapons are not tied to their legend choice; instead, we incorporate the core feel of using the Mists, and your connection to them, into the skills. This is a key part of the class that enhances the look and feel of gameplay as a revenant; you won't feel like a guardian with its flames or a warrior with its physical attacks. We want to push the feel of imbuing attacks with energy from the Mists to wreak havoc on the battlefield. This profession doesn't have access to weapon swap, but its legends more than make up for that, which you'll read about below.

I know by now you must be thinking, "Come on, tell me what some of the skills are!" I'll indulge you with a few. Of course, in the expansion, we've picked up some new skills and acquired awesome new tech from our programmers. Here goes...

We've given new and interesting purposes to current weapons. One of these weapons is the hammer, which you may think of as slow and physical. That's not how the revenant uses it! Revenants use their powers to enhance the hammer in order to use it as a ranged weapon. That's right—you'll use these unique powers from the Mists to throw a magical hammer at foes, create massive zones of destruction, and preemptively control your foe.

"Slam the ground with your hammer, creating a cascading eruption of energy." 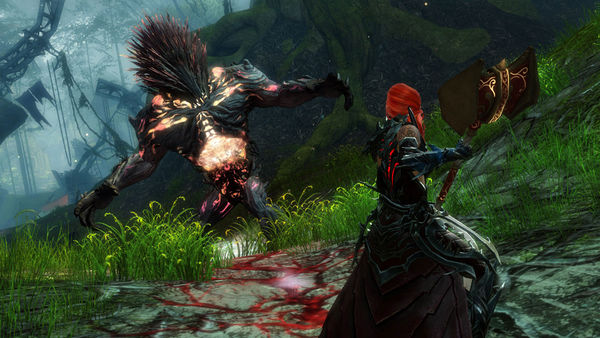 Field of the Mists

"Create a field from the Mists that blocks incoming projectiles in front of you." 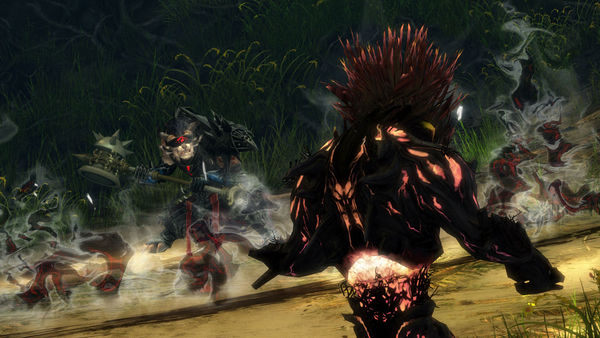 While we don't throw any maces at foes, this weapon does offer a unique play style that is themed to work with the axe. Both the mace and axe use a style that requires you to pay attention to your position in relation to your foes, as the attacks are all directional.

"Deliver a crushing blow that sends toxic energy chaining to enemies behind each target."

As mentioned above, the axe is very directionally focused. It's also a hybrid weapon, but it's much more about utility than damage. Have you ever wanted to slice through the air, creating an epic rift in the world? The axe will allow you to do just that!

"Slice into the Mists, creating an unstable rift. After a short duration, this rift will collapse in on itself, pulling in enemies." 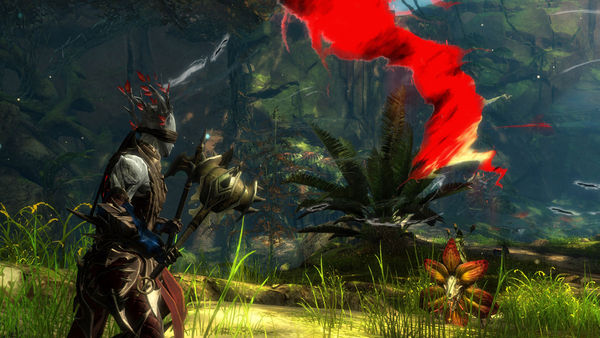 I suppose it's time to dive a bit more into the legends themselves. Again, legends are a core part of the revenant, as they determine the skills in the right half of your skill bar. More than that, each legend includes a package of skills themed to that legend and a specific play style. In that sense, each legend will feel very distinct; you will choose each one with a set purpose in mind. Each legend's skills are designed to be very visual. From a glance at the skills used, one should be able to tell which legend is being invoked. Each legend has its own color, style, and theme.

"Invoke the power of the legendary demon Mallyx the Unyielding."

Demon stance focuses on conditions, with a twist. Let's call it condition manipulation. Instead of dealing with conditions in the traditional sense—mostly by removing them—your approach to conditions as a revenant is all about accumulating them in order to empower your attacks. The more conditions you have, the stronger and more impactful your demon legend skills will become. Let's look at an example. 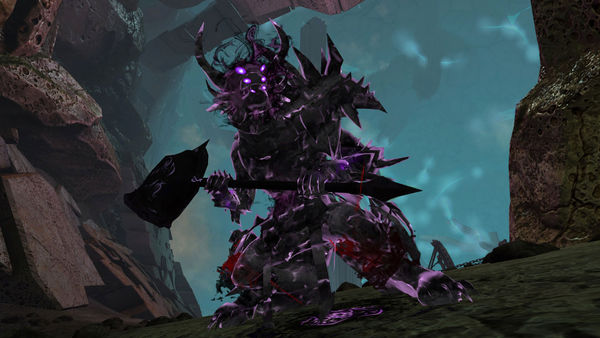 "Summon the power of the legendary demon to transform into a powerful avatar. Increase all attributes, and copy conditions to nearby foes every few seconds."

"Invoke the power of the legendary dwarf king, Jalis Ironhammer."

I don't know about you folks, but when I think of a dwarf, I think of a tanky, brawling play style. And that is exactly what you'll get if you choose this legend. When you use the Legendary Dwarf Stance, it's all about sustaining yourself while maintaining a frightening presence on the battlefield that your foes will not soon forget. Let's check out another example of an upkeep skill with exciting new tech.

"Invoke hammers to circle around you, damaging foes."

New boons, conditions, and status effects have been added to the revenant as well as spread across other professions' specializations. These are cool ways we'll allow players to interact with new types of skills in our combat system.

"Conditions currently on you have no effect; stacks duration."

"Skills and actions are slower."

This was just the tip of the iceberg. There are more weapons and legends coming with the revenant, but you'll have to wait to find out more. It's no fun to spoil everything at once. 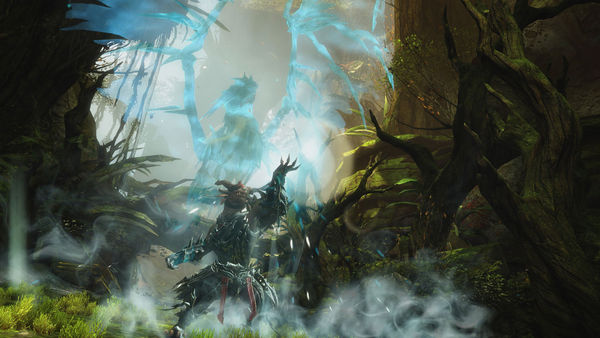 All of the features that I detailed today in this blog will be available in our first playable demo at PAX East in Boston, March 6–8, and at Rezzed in London, March 12–14. I'll personally be at PAX East on the showroom floor, and I hope to see some of you there trying out the expansion for the first time.

See you all on the battlefield!