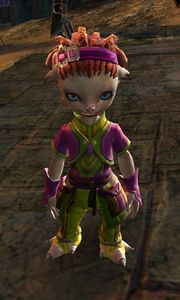 Welcome, one and all, to an afternoon of extravagant face-punching!

Elli is an asura whose dream job is to work as a fight commentator. She uses a holographic projection of herself to boost her presence as it is both much taller and ten times louder than her. She created it for her Snaff Prize school project, however it did not win the contest.

Elli begins her career by commentating on an "illegal" golem-fighting competitions. She later goes to other arenas, such as one near Stoneguard Gate where a sylvari Valiant acting as Herald of the Pale Tree can get her to fill in for a drugged commentator. After the formation of the Pact, Elli meets Agent Zott who sees her holographic projection and modifies it so that it can be corporeal in a fight, allowing Elli herself to fight through her hologram. She joins Zott's missions with the Pact, stealthing herself during combat while her hologram fights Risen, and slowly garners feelings for Zott. However, Zott is killed by the powerful Risen hunter, Marksman Rukbat Rami. Elli remains with the Pact afterward, however, fighting to end Zhaitan's threat in memory of Zott.

Her technology is later used during the Captain's Council's celebration of Dragon Bash, where it is stolen by Aetherblades and used for their own holographic pirates in Twilight Arbor.

According to Agent Zrii, Elli left the Pact after Scarlet Briar's attacks ended. Zrii suspects the reasons being due to Scarlet's use of killer holograms, and says that Elli has delved into a new line of experiments but doesn't know the details of them.