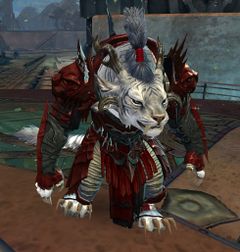 Galina Edgecrusher is a centurion of the Blood Legion. She can be encountered in the early personal story for Iron Legion characters and is one of the possible NPCs the player character can recruit for the fight at Claw Island. Snarl Backdraft is in love with her, and Galina seems to return his affections. However, she believes that a relationship between them would not work out, due to them being from different legions.

Galina Edgecrusher and Snarl Backdraft served to demonstrate how the Blood and Ash Legions had modified Ghostbore Musket technology developed by the warband of the Iron legionnaire. Before the legionnaire arrived with their sparring partner, the two charr began arguing with each other in front of tribunes Bhuer Goreblade, Torga Desertgrave, and Rytlock Brimstone. Once the legionnaire arrived, the two showed off the modifications the Blood and Ash Legion had made to the Ghostbore Musket, with Ash preferring more mobile, smaller weapons, while Blood designed a large, stationary cannon.

Galina demonstrated Blood's cannon first, taunting the Ascalonian ghosts while attacking them with it. Snarl then released some more ghosts from a containment unit, and had the legionnaire deploy them, destroying the ghosts efficiently. If they chose the Ghostbore Cannon, Galina aided in defeating Warmaster Labofski and witnessed Cimmara Pistolwhip running into the catacombs, where she was rescued, and transferred into the warband of the legionnaire.

After Claw Island was overtaken by the Elder Dragon Zhaitan's minions, the Risen, Galina attempting to deal with a Flame Legion shaman by the name of Exaerix Infernus along with Snarl, who had been captured by a cavern full of human Separatists. Trahearne and the Warmaster appeared and rescued Snarl who then convinced Galina to go to Claw Island where they aided in retaking it.

In the Ruins of Orr, Galina and Snarl were assisting a group of Pact members including Agent Zrii in defeating a Mouth of Zhaitan, and the Pact Commander arrived to aid the group. They either entered the former estate of Lord Kitah, and confronted the Mouth directly, or starved the Dragon champion, killing it after it had been weakened.

Later, she assisted the Commander and Trahearne in cleansing Orr by holding the line against the Risen attacking the entrance to the Artesian Waters. After the Risen broke through, she, along with the other Pact members guarding the entrance, fell back to the source of Orr itself, and then regrouped in Fort Trinity. Soon after, she assisted in killing Zhaitan, mentioning in the victory celebration afterward that she thought Snarl might be in love with her, but she wasn't sure about it.

In Dragon's Stand after the Pact fleet crashed, Agent Zrii mentioned that she believed that they were still around somewhere, irritating the Mordrem with their quarreling.

In 1333 AE after Imperator Bangar Ruinbringer had formed the Dominion, Galina joined the United Legions, and was promoted to the rank of centurion. Here, she worked with Snarl in keeping up troop morale even when Ryland Steelcatcher's warband controlled most of Drizzlewood Coast and was assisted by the Commander, who seemingly recognized her, and Rytlock Brimstone.

Before completing Shoulder to Shoulder
Commander—I'd be happy to chat, but I think my commanding officer over there is giving us the eye. You should go talk to her.

After completing Shoulder to Shoulder
Keep up the good work, Commander. You helped give us a real chance—we'll hold things down here.

Greets
Need a head bashed in?