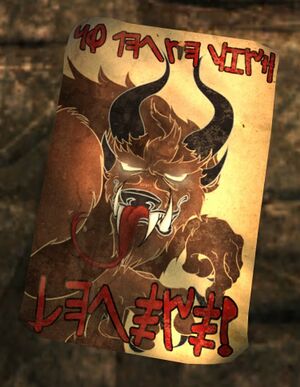 Separatists propaganda. "No peace with beasts."

The separatists. They hate the treaty and anyone working for peace between the humans and charr. They'll stop at nothing to continue the war, from covering the walls with propaganda to violence.

Separatists are a group of human outlaws who ignore Queen Jennah's ceasefire with the charr. They try to disrupt peace talks through violent tactics, and will even kill other humans if it means they can restart the War of Ascalon Independence. The official stance of the Ebon Vanguard is that they are extremists who cannot be negotiated with. They are found throughout Ascalon, naming their camps after Ascalonian warheroes of old, such as Keiran Thackeray and Lady Althea.

Above the rank-and-file, the structure of their organization is largely a mystery. Who leads them, and how their operations are financed, is unknown.

In 1325 AE, Vallus Smokemane attempted to give the idol of Balthazar to the Separatists in exchange for his captured warsibling, but was stopped by his legionnaire, Emer Whipmane. Later that year, Separatists, led by Captain Monique DeLana, attacked a party celebrating the human-charr détente at Caudecus's Manor in Kryta. They attempted to kidnap Queen Jennah, but were stopped by Logan Thackeray, Zojja, and the Pact Commander.